With the Open Monitoring Distribution, you only need to install one RPM/DEB package to get a ready-to-use and perfectly tuned monitoring system. It also allows you to run multiple monitoring sites on one server without any problems.

What is the Open Monitoring Distribution?

The Open Monitoring Distribution (OMD) is an open source project founded in 2010 by Mathias Kettner and other well-known members of the Nagios community. The idea behind the project was to provide a preconfigured Nagios installation with selected add-ons and thus significantly reduce the effort of manually setting up a Nagios monitoring and also compiling and integrating add-ons.

Nagios itself is only a small component in a complete monitoring system. Only by adding numerous extensions, such as PNP4Nagios, NagVis, Checkmk, Livestatus etc., plus the Nagios plug-ins and the Apache web server, will you get a complete solution. The classic approach to setting up a Nagios monitoring system before OMD was to install all of the required components and then make them work together. This included self-compiling from the source codes and manually customizing the configuration files – a process that not only meant a lot of work, but also required a lot of experience in order to get an optimally-tuned monitoring system at the end.

OMD's approach included the provision of a precompiled Nagios monitoring with all important add-ons – and all of these preconfigured and well-matched to each other. In addition, right from the outset OMD has supported all common enterprise Linux distributions such as Debian, Ubuntu LTS, RedHat/CentOS and SLES.

One package – all included

With the Open Monitoring Distribution, after installing an RPM/DEB package, you get a ready-to-use monitoring system with precisely matched and preconfigured components.

OMD allows an easy installation in a few minutes and takes dependencies to OS packages into account. Start your monitoring right after installation – without the need to reload third-party software.

OMD's architecture also allows you to run multiple instances on one server in parallel - even with different OMD versions.

The advantages of OMD

One of the great advantages of OMD is that all of the important components can be installed with an RPM/DEB package, and dependencies on OS packages are also taken into account. This means that with OMD, monitoring is ready for use immediately after installation.

An OMD-based installation has the following features:

A major advantage of OMD is that it can run any number of monitoring sites on one server without virtualization. Each of these sites is a closed monitoring system that runs separately from the others. However, all sites can be administered centrally and thus, for example, updates can be rolled out specifically to the desired instance. A further advantage of OMD's structure is that all of a site's data is located in a single directory, which makes data backup much easier.

The operation of several sites on a single server is made possible by the way the Open Monitoring Distribution works – it generates a unique name for each site, which the user assigns when setting it up. This name corresponds to a Linux user and thus follows the same conventions as user names under Linux. The necessary processes of the sites then run under the user's own Linux username.

Due to the strict separation of software and data, it is also possible to install several versions of OMD in parallel in addition to operating several sites on one server. In doing so, OMD determines for each site which of the installed versions it will use.

This is made possible by the way OMD carries out an update. You do not have to update the complete Open Monitoring Distribution at once, rather only one site at a time. This gives you the choice of which of the sites you want to update to the new version and which not.

After installing the new OMD version via an RPM or DEB package, the desired site can be updated to the new version with the omd update command. Afterwards, the old OMD version can be uninstalled if it is no longer needed.

The copy function with the omd cp command also offers an additional, convenient way to carry out the update.

Furthermore, in the past it was possible to downgrade a site, i.e. to go back to an older version. The process works analogously to the update, since the omd update command does not care whether the target version is newer or older than the current version. Since Checkmk 1.6, however, a downgrade is no longer supported.

Why are there two different versions?

These days, there is no longer just one OMD variant, rather there are two. This is because the initiators of the project decided that it made sense to develop two specialized OMD versions. One is still the original version, which contains further extensions in addition to the original components. The second version is Checkmk, an independent and powerful monitoring solution with more than 1,900 official plug-ins for monitoring the IT infrastructure. Checkmk is fully compatible with OMD.

functionality for the first 30 days

The Open Monitoring Distribution and Checkmk

As a special OMD version, Checkmk benefits from all of the advantages of the Open Monitoring Distribution. This means that by simply installing a package, you get a perfectly pre-configured Checkmk, you can run several Checkmk sites – even with differing Checkmk versions – on one server and upgrade the individual sites conveniently. The migration of a site from one Checkmk edition to another, for example from the Checkmk Raw Edition to the Checkmk Enterprise Edition, is also possible without any problems. The control and configuration of the monitoring sites can easily be done with the omd command.

In addition, Checkmk has a built-in mechanism for creating backups and restoring Checkmk sites. The basis for this are the commands omd backup and omd restore, which pack all the data from an instance into a tar archive and unpack it again respectively. Creating a backup file via omd backup can also be done by a site user without root permissions. 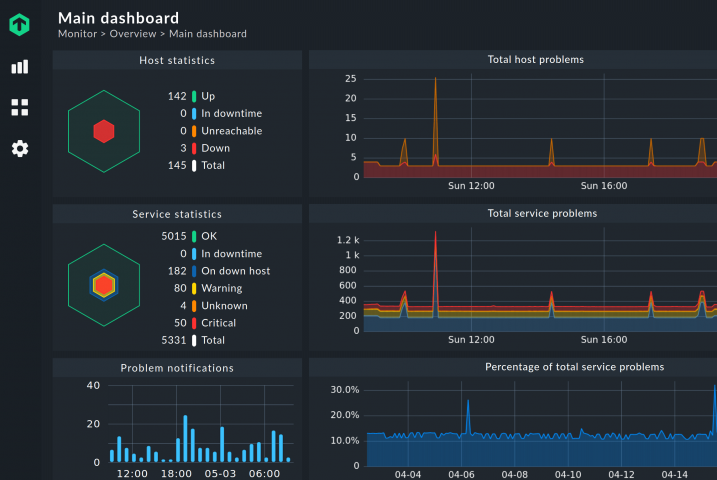 Restoring a backup is just as easy: With the omd restore command, a site from a backup can also be restored for a site user, since the site is not created entirely new, but the existing site is emptied and refilled. This process does not require root permissions. However, a site can only be restored to the checkmk version that was used to create the backup.

As already mentioned, after installing a DEB/RPM package, it is possible to set up Checkmk with the omd command. This overview shows the most important OMD commands for Checkmk, where MySite serves as a placeholder for the chosen name of the site (if you do not execute the command as a site user):

Further information on the individual OMD functions available in Checkmk can also be found in our manual.

Download the latest version of Checkmk Enterprise Free Edition today and see it in action.