E2E-Monitoring: Make sure your applications are running

With infrastructure or system monitoring, an IT team can keep an eye on the health of its IT infrastructure at all times. In this way, problems can be identified quickly and easily and faults can be rectified before they affect the IT infrastructure. One area that such monitoring does not cover, however, is user experience monitoring: Does the software work as it should for the user or do long loading times slow down the employee's productivity?

This problem is becoming more apparent with the growing use of cloud platforms, services and infrastructures in organizations. Here an IT administrator often has no access to the underlying infrastructure. This means he cannot look as deeply "under the hood" as would be possible with a local infrastructure. This makes it much more difficult to find the cause of a problem occurring within an application.

End-to-End monitoring gives IT administrators the ability to illuminate such dark areas in their IT environment. It aims to make the operation of the provided IT infrastructure as trouble-free as possible.

This blog article aims to raise awareness of the need for End2End testing and explain how to integrate such tests into Checkmk.

Orientation in the OSI model

Why End2End-Monitoring is important is made clear by looking at the OSI layer model. The model shows what an administrator can monitor using IT infrastructure monitoring – and shows where the natural limit of this type of monitoring is to be found.

In this model, network protocols basically build on each other in layers. For example, the echo request from the ICMP check traverses layers 3, 2 and 1 before it then travels up through the transmission medium (air or cable) on the target host through layers 1, 2 and 3 again. There it is confirmed with a response packet which is returned in the opposite direction.

What happens in detail with the package on its journey through these layers is irrelevant to Checkmk and is not the topic of this current article. What is important is that the request from layer 3 is answered within a certain time, so that Checkmk can mark the host as 'UP' – i.e. reachable.

This is because for example, a web server must be able to do more than just answer ICMP requests, there are of course also checks for the protocols of higher layers.

If Checkmk checks a target host, for example, with an FTP check, the packet in such a case starts in layer 7 (= the FTP plug-in), travels down through all layers and at the target host it travels back up to layer 7, where the FTP server is ( hopefully ) operating. It answers this request and then returns the packet.

The colors in the previous and following graphics show exactly what you know on the one hand, and on the other hand what you can derive from it:

The name of layer 7, the so-called 'application layer', could easily give the impression that this is exactly where the applications that users work with are located. But this is not the case.

Layer 7 is only the input and output interface for the applications and these are dependent on it. This is unfortunately often misunderstood.

In view of the fact that the extended OSI model on Layer 8 defines the human or user, one needs to think of an intermediate layer on which the software runs ('Layer S').

And this makes it clear: With monitoring checks you actually only ever check the prerequisites for the software layer (= all inclusive. Layer 7) – but never the status of this layer itself!

What is the actual role of an administrator?

Yes – and also no. There is actually really one job: to ensure that users are satisfied when using the services and applications provided – i.e., that they have a good 'end user experience'. This is what IT is measured and judged by. All of an administrator's other tasks are only a consequence of this 'mission':

That the software in use is actually functioning remains a matter of speculation as long as the administrator does not monitor the software directly, but only monitors up to layer 7.

With this background knowledge, it is now possible to explain the meaning behind the term 'End-to-End': the aim is to move monitoring in the OSI model even further up the ladder – to the limit of computer to human interaction. To the highest level, you could say. During end-to-end monitoring, this layer is tested from the user's perspective.

So yes – let the testing be done for you. Robot Framework is one of the best open source tools for automated testing. Like a robot, it shuffles through the same paths in an application over and over again and can handle any kind of application, be it web-based or installed on Windows or Linux.

By the way, Robot Framework is not only used for testing software. It is also very well suited for RPA (Robotic Process Automation). The idea behind this is to automate workflows that normally only humans can perform, such as stupidly entering data into existing software that has no import interface. Robot Framework thus comes very close to the image of a 'software robot on the assembly line'!

If there is one feature that sets Robot Framework apart from all other test tools, then this is certainly its "keyword driven" approach. Robot is also extended with libraries, which, for example, via special keywords provide the test methods for Selenium, AutoIT, SAP, Sikuli etc. Keywords abstract the Python program code that would be necessary for Selenium tests, for example.
Keywords can be nested like functions in a scripting language and provided with input and output parameters. Certainly, programming tests in Python provides the maximum freedom, but however also restricts the circle of those who write tests to programmers. Because robot keywords encapsulate and abstract Python code, they make writing and reading/understanding tests much easier.

In this extract from a robot file, the Selenium library is used for web testing (line 2). After defining two variables in the 'Variables' section, the 'Test Cases' section begins. The 'OpenPortalAndLogi'" test case executes a set of keywords from the Selenium library to perform the login to a web application.

When formulating tests, one should always take care to verify the desired target state, as line 17 shows: the login was only successful if a span element exists that contains the text 'Robotmk user'.

The integration of such robot tests into the monitoring was up to now not possible, nevertheless here it concerns both the regular execution and the evaluation of the results – because in any case functional or performance-technical errors should also be alarmed.

"Robotmk" is an extension specifically for Checkmk which closes this gap.

This is available on https://exchange.checkmk.com/p/robotmk as the MKP (MK-Package) and it is compatible with all Checkmk 1.6 versions. The central building blocks of Robotmk are the plug-in and the Check.

The plug-in is triggered either asynchronously via the Checkmk agent, or externally via the task scheduler, and it executes the robot test cases on the target machine.

The result from each test is transmitted via the agent output to the Checkmk server. There the check not only evaluates the runtimes from the different test sections but also influences the length and the form of the output. A further rule defines which test sections should generate performance data.

Using the Discovery Rule, it is also possible to create separate services from individual sections of a test. This is especially helpful, for example, when a robot executes a test several times using different test data, or when different teams need to be separately alerted concerning the test sections. In addition, for Test Suites a kind of 'real-time progress display' can be provided in Nagvis.

With the OSI layer model in mind, it becomes clear why the 'Layer S' above the application layer should not remain a blind spot in monitoring – after all, this is the layer with which the user interacts with the infrastructure.

Note to the author:

Simon is an active member of our Checkmk community and introduces in our blog his Checkmk plugin Robotmk, which is based on the Robot Framework and allows end-to-end monitoring with Checkmk. Simon is
CEO of Elabit and specialist for IT topics like monitoring (Checkmk), configuration management (Ansible) or RPA/Robotiv Process Automation and test automation (Robot Framework, Robotmk). 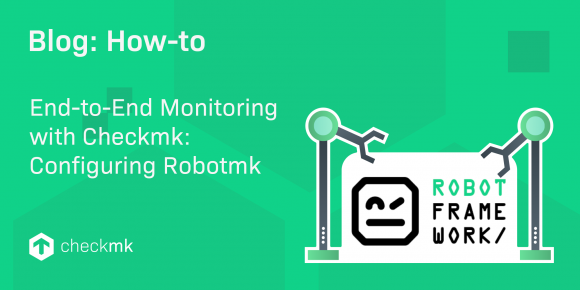 End-to-End Monitoring with Checkmk: Configuring Robotmk
The first part of this blog series focused on showing why you should literally think things 'through to the end' when monitoring applications end to…
Read more